My dear readers, I have some exciting news...after exactly nine years at Cranfield University, I am moving on. From the first of October, I will be taking up a position as Senior Lecturer in Forensic Science at The University of Huddersfield, in the Forensic and Analytical Science Group in the School of Applied Sciences. I am particularly excited because I will be continuing my forensic taphonomy research with a new, improved decomposition facility (please submit name suggestions if you have any), and will be introducing new Forensic Anthropology courses there. I am also looking forward to living in the beautiful Peak District! More updates to come soon...
Posted by Dr Anna Williams at 12:06 No comments:

Those of you lucky enough to have access to Sky TV, and in particular the National Geographic Channel, might like to keep an eye out this Saturday evening (13th July, 8pm, in the UK) for a new documentary on the life and death of Egypt's most famous Pharaoh, King Tutankhamun, called 'Ultimate Tutankhamun'. The documentary is hosted by Chris Naunton, Director of the Egyptian Exploration Society. It revisits some of the long-held debates surrounding the mystery of King Tut's death, and uses modern forensic techniques (some done by yours truly!) to investigate possible scenarios that could explain the evidence found on his body. The investigation (or at least the part I was involved in), used a state of the art anatomy imaging system, the Anatomage table, to visualise the damage to his skeleton. The investigation was a joint effort between archaeologists, Egyptologists, historians, forensic pathologists and anthropologists, biomechanics experts and accident investigators, working together to examine King Tut's remains as thoroughly as possible using the latest tools. Chris has written on his blog about his experience making the documentary.
You can watch the trailer here. I've spotted myself in the lower right hand corner of the screen in this shot! 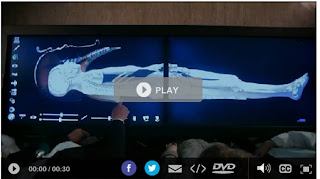 Posted by Dr Anna Williams at 15:05 No comments: