I have had a very hectic summer, hence the lack of posts! I'm sorry.

Earlier in the year, I joined colleagues from Bangor University and Reading University in applying for a Newton Fund Researcher Links grant from the British Council to deliver a workshop in Mexico in September aimed at fostering Anglo-Mexican collaborations. In late August, we heard that the application had been successful, and suddenly, we were off to sunny Mexico!

The workshop was about Forensic Taphonomy, combined with the (I think) relatively unknown discipline of Forensic Acarology. What is forensic acarology? You'd not be the only one asking. Acarology is the science of microscopic mites and macroscopic mites including ticks. Every single person is home to millions of mites - they live in the pores of our skin, in our hair, including our eyelashes, eyebrows and pubes. They live in our houses, share our beds and bathrooms. Apparently the populations of mites found are specific to different parts of the house - there will be different species living on windowsills to the rest of the room, or on your pillow or in the middle of the bed. About  10 million house dust mites (HDMs) live in the average bed.

Not surprisingly, given their diversity and specificity to certain conditions, mites can be really useful in forensic situations. Mites, like flies, are quick to colonise a corpse, but they arrive on the bodies of the flies, jump off onto the cadaver and lie in wait to predate on the newly hatched fly larvae. They reproduce more quickly than flies, so can in some instances, be more accurate for estimating time since death. Their specificity means that they can be used in a similar way to other trace evidence, such as soil, diatoms or pollen, to determine where a suspect has been, if a body has been moved, or to link a suspect to a victim or scene. However, given their tiny size and the difficulties there are in identifying them, they have not taken off as a forensic diagnostic tool. More information about the use of mites in a forensic context can be found here.

The workshop focused on introducing Mexican police, criminologists, acarologists, entomologists and anthropologists to taphonomy, decomposition in different environments, search and location techniques, and exploring the potential for cadaver dog training and creating a human taphonomy facility (otherwise known as a 'body farm') to Mexico. As you can imagine, I was rather excited about this possibility! I ran an exercise where the delegates had to plan the structure of a potential research facility, taking into consideration different requirements such as storage, security, lab spaces etc.


There are different ethical constraints and restrictions in Mexico compared to the UK, but there is a lot of interest among the right people for getting an HTF, as they can see the obvious benefits to forensic science.

During the week, we also undertook a practical exercise where we extracted soil mites from a site where a body (pig carcass) had been deposited.

There was a big difference between the soil mites collected from control samples 2m away from the carcass deposition site and those in the soil underneath where the body had been lying. Identification of the mites showed us that they were typical corpse-colonising species.

All our hard work was rewarded with some down time. We happened to be there during the Mexican Independence Day celebrations. There were fireworks, parades in the streets, amazing food and music. Here is a couple dressed in traditional clothes. 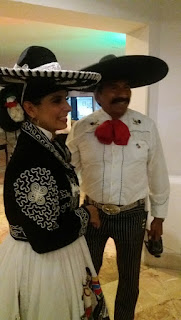 And of course, when you're in Mexico, you should do as the Mexicans do...

Needless to say, we had a fantastic time. I am confident that there is plenty of scope for research collaborations with delegates and the Universidad Autonoma de Queretaro, where the workshop was held, and, hopefully more academic and cultural exchanges in the future!

Posted by Dr Anna Williams at 11:35 No comments: