As you may know, I have done a bit of research on what decomposition smells like. We at the University of Huddersfield Forensic Anthropology Research Group have been looking at the volatile organic compounds that are given off by a cadaver as it decomposes, and determining how knowledge of these compounds can help us improve the training of specialist 'victim remains' detection dogs (see previous post: What's that smell?, and this article in The Conversation.). I have also presented some interesting, interactive talks and demonstrations where the audience get to smell for themselves some of the main players in the 'scent of death'.

In my talks, I have often described the scent of death and decomposition as a 'symphony' of smells, of chemicals waxing and waning with time as the process unfolds. In light of this, I have recently teamed up with exciting, London-based artist duo French and Mottershead to describe the process of decomposition in sound. They have created the fascinating suite of interactive works called Afterlife, that explores the 'experience' of decomposition - a medley of sounds, smells and 'feelings' of the final journey from a whole body to our constituent parts. Take a few minutes to listen to their slightly disturbing, macabre but strangely soothing and lullaby-like piece about a body decomposing in a woodland environment here.

They also devised and organised the fantastic Passing Encounters Open Seminar, held at UCL on the 6th February this year, that brought together artists, historians, forensic anthropologists and sociologists to discuss attitudes towards death, dying and decomposition. I was very happy and honoured to be invited to speak and to bring the scent of death experience with me. Here is a picture of the faces of the audience as they smelled some of the odours associated with decomposition. 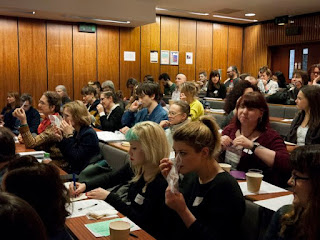 Our new project involves trying to capture the sounds of decomposition. I love the concept of taking a well-known process and looking at it from another perspective. We're working with experienced and dynamic sound recordist/sound designer Pascal Wyse. I helped them by providing some decomposing animal carcasses for them to record. We started off looking at rabbit carcasses (not killed for the purposes of the research) in different stages of decomposition. We recorded the sounds from this rabbit clearly in the bloat stage (reached after about a month after death in this case). Flies were attracted to the corpse, there were maggots active around its orifices. We put a special microphone up against its bloated abdomen as well, to listen to any sounds of gases gurgling. 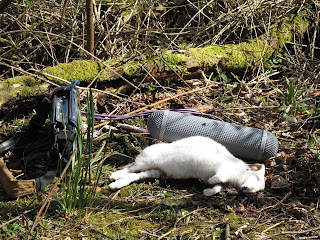 We are hoping to extend this work to capture the sounds of larger animals decomposing, and hopefully, one day, with appropriate funding, take sound recordings from human corpses. I absolutely love this multidisciplinary type of work, taking advantage of the intriguing cross-overs between scientific and artistic endeavour. Hopefully, we will have more to tell you soon - watch this space!