Last month, I was lucky enough to give a talk at the Otley Science Cafe, which is part of the Otley Science Festival, a fantastic initiative led by the unmistakable Marty Jopson in his lovely home town of Otley, near Leeds. Every few months, adults and children with enquiring minds pour into the Otley Courthouse to hear speakers pontificate about their favourite science subject. The Cafes have an informal atmosphere, where audience participation is encouraged and the drinks flow freely. On the round, candle-lit tables, you're as likely to be sitting next to a retired engineer, a fossil-hunter or a ten year old keen on astronomy. The speakers are just as diverse. At the last one, on the 17th September, my fellow speakers were Professor Stuart Egginton from the University of Leeds and Dr Chrissy Hammond from the University of Bristol.

Professor Egginton had the audience enthralled with stories of transparent Antartic ice fish whose physiology allows them to survive at extreme low temperatures - just. He described how their hearts beat at the limit of their capability, and any change in sea temperature will be devastating. 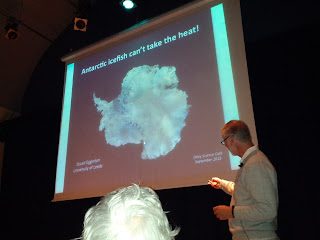 In her fascinating and entertaining talk, Dr Chrissy Hammond explained how she uses zebra fish to investigate the genes that cause osteoarthritis and produce an elegant model for the development of cartilage in bone in vivo. She even brought along some of her zebra fish models (in the bottle on the table). 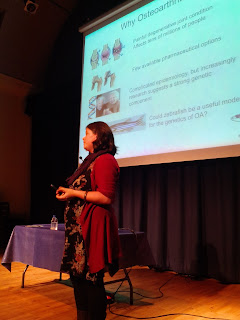 In my talk, I invited the audience to take (careful) sniffs of some of the chemicals that we at the Forensic Anthropology Research Group at Huddersfield have identified as being present at different stages of decomposition. I described how knowledge of how these chemicals wax and wane throughout decomposition can be used to improve the training of dogs trained to find human remains. 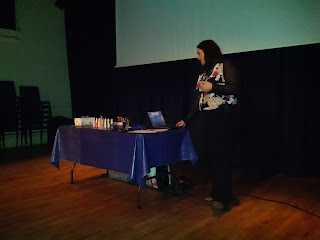 All in all, the evening had a distinctly 'fishy' tinge to it, but a great time was had by everyone. I greatly recommend that you make a bee line for the Otley Science Cafe next time it is on, and in the meantime, put a date in your diaries for the next Otley Science Festival, which is on from the 9th to the 14th November in..you've guessed it...Otley! It is a brilliant event aimed at increasing awareness and participation in science, whatever your age.