On Friday night, I joined several other 'death professionals' and like-minded academics, in a brilliant public engagement event at the Royal Institution. The event, called 'Life and Death' was one of their series of 'Lates' - adult only, evening events for the public.

There was a great range of interactive exhibits and stands - you could try a 'toxic' cocktail with traces of cyanide or poisonous rhubarb, touch plastinated cat and dog corpses, find out about the most famous inhabitant of St Bart's Pathology Museum, Mr Bellingham, talk to humanoid robots and bring your 'craptop' back to life.

In conjunction with ArtNecro, I was there to introduce unwitting attendees to the joys of the unmistakable smell of decomposition and death, as a result of our research at the Forensic Anthropology Research Group into the volatile organic compounds given off by decomposing cadavers. I talked to the visitors about how decomposition works, and how a different combination of gases are emitted at different stages of the process. 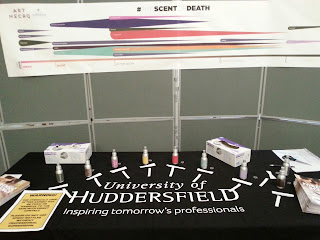 Then it was their turn to sniff the different volatile organic compounds that we had brought along as representative of every stage. Some of the chemicals were surprisingly unoffensive, and some got some tremendous reactions - I wish I could have captured their faces on film! 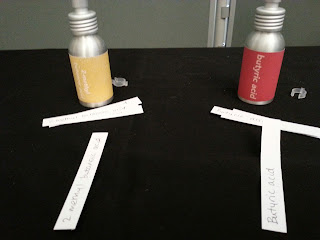 The attendees were allowed to smell very diluted solutions of hexane, which smells of cut grass and tomatoes, indole, which most people thought smelled of mothballs and old people's homes. They also smelled 2-methyl butanoic acid, which most people thought was the most repulsive, as it honks of cheesy feet and old trainers. Some people objected to the buytric acid, which has a strong odour of vomit. After they had sniffed diluted spray versions of these pure laboratory produced chemicals, I offered them a chance to smell the delightfully named 'pig juice' samples I had brought along from some of our pig-based decomposition experiments, from a pig cadaver that had been buried for a month. Everybody was brave enough to smell it, although some regretted their decision!

I think most visitors enjoyed it. I certainly did, taking perverse pleasure in seeing people's faces scrunch up as they smelled the unforgettable, unmistakable scent of death (#thescentofdeath). Working as I do in taphonomy research and attending crime scenes, I have got used to death's particular odour, and probably smell it almost every day, but it is not something that most people have experience of - luckily for them! 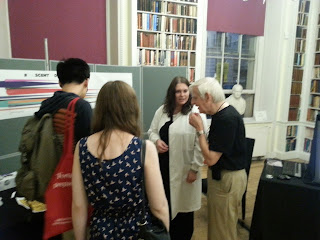